The 10th Swiss Aerosol Award has been presented at the annual conference of the Swiss Aerosol Society November 3, 2020 to Dr. Lukas Durdina (EMPA and ZHAW) for his publications on particulate emissions of a business jet and to Eric Sauvageat (Uni Berne) and Yanik Zeder (Swisens AG) for their work on Real-time pollen monitoring using digital holography.

Business aviation is a relatively small but steadily growing and little investigated emissions source. Regarding emissions, aircraft turbine engines rated below 26.7 kN thrust are certified only for visible smoke and are excluded from the non-volatile particulate matter (nvPM) standard. Emissions data for small engines are lacking. As the demand for air travel surges, fuel burn from commercial aviation is expected to double in 40 the next 15 years. The fleet is even predicted to grow worldwide by 33% in the next 8 years.

Despite the small aircraft size and relatively low fuel burn, the nvPM mass emission rates were up to a factor of 3 higher than previously reported for the Boeing 737 engines. We have shown here that a modern business jet may emit as much nvPM from airport operations as an airliner. The comparison with airliners at cruise altitude suggests that nvPM emissions from a business jet flight may be higher than those of an airliner. Expressed as a per-person burden (assuming 180 airliner passengers and 5 business jet passengers), the nvPM mass emissions are higher by a factor of 72 and the nvPM number emissions are higher by a factor of 24. 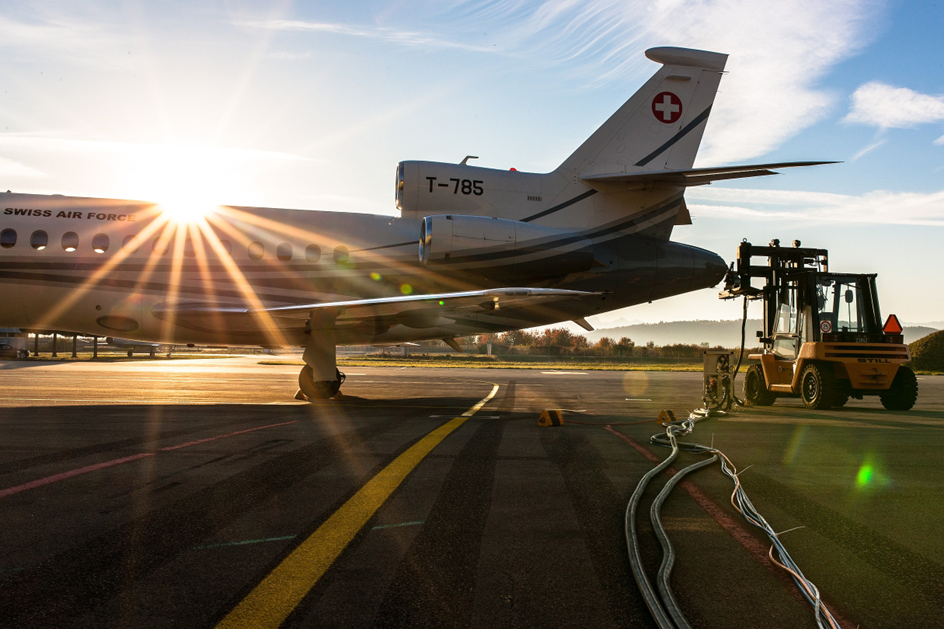 Sunrise above the Falcon 900 EX with the exhaust sampling probe and instruments in place. Photo: Lukas Durdina.

As new real-time pollen monitoring devices emerge, there is a growing need for processing the large amount of measurement data in an accurate and efficient way. Eric Sauvageat and Yanik Zeder develop and validate a new algorithm to classify real-time particle measurements taken by the “Swisens Poleno”. This instrument is currently the only operational pollen monitoring device using digital holography.

To identify and classify the pollen particles measured by the Poleno, the holographic images are first used to separate pollen candidates from other particles based on their general shape. As a second step a machine learning algorithm was developed and trained by inserting known pollen particles in the device. The resulting dataset is then used on the unknown pollen grains to discriminate between the different taxa. This two-step procedure enabled the system to identify and classify 8 pollen types, whereby 6 of them had accuracies greater than 90%. In addition to the classification ability of the device, the authors also investigated the counting accuracy of the Poleno by performing controlled chamber experiments.